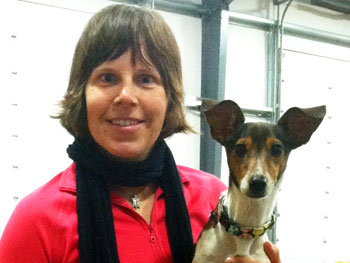 Now that things have calmed down from their big journey, Joy has taken a bit of time to fill us in on what it was like to compete at her first international competition in the Netherlands. I’ve included questions about how a big trial is run and how she felt about her and Chiqui’s performance. I love Joy’s attitude and hope you will enjoy this conversation as much as I did! Don’t miss the fantastic videos of some of her runs.

Last time we chatted, we discussed concern for keeping perspective, being able accomplish a familiar activity in a unfamiliar location. What if anything did you do to help yourself and Chiqui feel “at-home” enough to behave as you would at a normal local competition?

A friend told me about a podcast she heard from Susan Garrett, and at one point Susan says: “International competition is just agility in another country.”  It was very calming to embrace that statement.  And guess what?  It’s true.  So, Chiqui and I went through all the same routines that we normally do at a local trial.  Having that familiar pattern kept us comfortable.

I made the environment feel familiar by doing familiar things.  But with all that same-ness, I did still want to enjoy being at an international competition.  So, I also sometimes reminded myself of where I was: “Hey Chiqui, we’re doing agility in The Netherlands!  How cool is that?!”

So, as a newbie to this level of competition, what surprised you and/or challenged you leading up to your runs?

I think my biggest surprise was how much bigger the classes were.  Class size affected walkthroughs and the length of your “waiting time”.

For walkthroughs: Even though there were multiple walk throughs, the course sometimes got very crowded and it felt a bit like bumper cars.  So,  you just had to let it slide when people ran into you and not let yourself get all worked up how hard it was to walk a critical portion of the course (cuz everyone else wants to walk it too… over and over again!).

For “waiting time”: except for when the toy dogs ran first, it took a long time to get to my jump height.  For me, once I’ve walked a course, I want to run it: sooner rather than later!  The longer I have to wait, the longer I have to monitor my thoughts and make sure I don’t “psych myself out”.  And since I haven’t been to Cynosports yet, this was the longest I had ever had to wait between walking a course and running it.  But in the end, it wasn’t such a big deal.  It was just something that I had to recognize was different and adjust accordingly (e.g., watch more runs than I normally would, eat a snack after walking the course, take a longer warm up…).

How was this trial organized differently than our local trials?

Actually, I thought it was organized pretty similarly to a local trial, just on a bigger scale. It was still a “single ring trial” with a walk-then-run format, there were still awards ceremonies after the classes, the courses were similar to USDAA Team and Masters Challenge courses, and there was a practice area.  Crating was in a different building, and the practice area contained multiple jumps and a tunnel (not just a single practice jump), and you had to wear your competitor ID to get into the restricted parts of the facility (i.e., the crating area)… but overall the format felt very familiar. 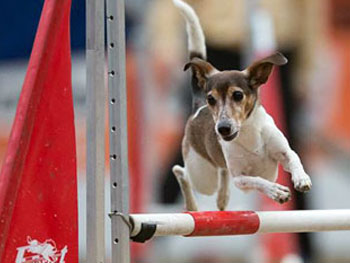 What was going through your mind as you queued up to take your turn?

I was very careful to monitor what I think about right before a run.  Once there were only 3-4 dogs until it was my turn, it was time to get into the official queue.  At this point, Chiqui’s warmup was done and I was concentrating completely on the course and the process of how I would execute the run.  Thankfully, Chiqui also seems to do better with a little bit of “quiet time” right before a run, so it worked out really well for us.  I stop revving her up and thought about the run… maybe even “walking” an imaginary course in the queue.  Meanwhile, Chiqui sat quietly in my arms and ate treats.  If I watched someone at this point, it was only so that I could imagine myself moving through the course.  At the start line, I gave Chiqui time to stand in the dirt and focus on me and not the smells under her feet.  I had learned a few months ago that I shouldn’t try to rev her up at the start-line—it actually just stresses her out.  So we stood there quietly, and I told Chiqui something that I was thankful for.  Then when the judge indicated that we could start, I told her to “wait” and “mark it” (look at the first obstacle), and I took my lead-out.

How did you handle ring nerves for both yourself and Chiqui?

We kept our cool by repeating our pre-run patterns/routines. This routines were familiar for us, and had been successful in the past—which gave me confidence in them.  I did a written and walking course analysis.  I watched how other people did on the course (when there was time) but stopped spectating if I started feeling really anxious about how the runs were going.  I made sure Chiqui & I had plenty of time to warm up so she do doggie things (potty, roll around in the grass) and also have a long brisk walk.  I kept walking around, checking back in with the run order.  Eventually, I started the last parts of our warm up routine: switching between fetch/tug, brisk walk, and one brief practice in the warm up area.

I knew it was important to stay calm before the run because it can be really hard to “get ahold of yourself” once the nerves really set in.  But I did mess up one day when my jump height was last in the run order.  I watched “too many” runs in the stands and started to get really anxious.  It was really hard to recover from that, but Chiqui helped bring me back to Earth.  I started my warmup with her and just kept telling myself “Look at Chiqui, focus on Chiqui”.  We played fetch/tug and she rolled around, we took a walk around the facility, and that really helped to calm me down.  Thank god agility is a team sport! 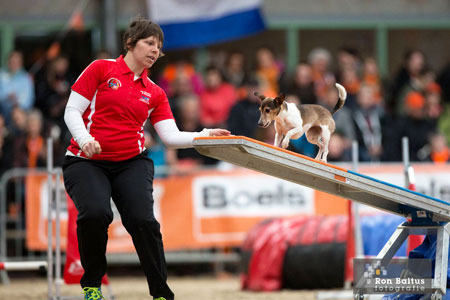 Here at home many of us watched the videos and were so excited for you. Were you aware of the ‘ home’ support and how did that make you feel?

Thank you!  I really did want to make you all proud, but I knew that if I let myself think about that while I was at the competition, it would make me really nervous.  I didn’t want to psych myself out by thinking about being on TV or trying to fulfill the hopes of my home support.  My solution was to put on blinders… once I boarded the plane for Holland, I had to shrink my world down to me and Chiqui and just a couple other people.  But once I got back… Man!  It was really to hear about people streaming agility TV during the competition—and making their co-workers watch too!

What most pleased you about your performance?

My successful mental management process, which resulted in good solid start-lines and a strong opening sequences. Mental management was something I had largely ignored until this year, and this was my biggest “test”.  I’m very pleased with the result!

How did you feel when you finished your runs?

Most of the time?  Proud of my little Chiquita.  Out of breath.  And very happy with our runs.  After one run, I really wanted to know “what went wrong with x”… but pushed that aside and focused on being proud of Chiqui.  There’s plenty of time for analysis later on… but you only have a small window in which you can thank your dog for the run and tell her what a great job she did. 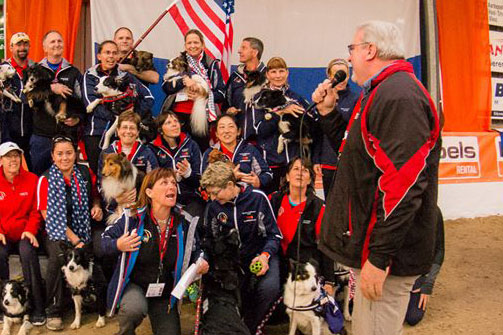 Was there any interaction with the other teams?

For the most part, countries stuck together. But there is a tradition of trading uniforms (shirts and/or jackets) on the last day, and many people wanted to get a jump on the deadline so they could be sure to get exactly what they wanted—so some people interacted during the competition.  But competitors definitely mixed it up a lot more on the last day.

How did you meet agility handlers from all over the world?

I learned that, if you want to meet a handler from another country, you should start by asking if she speaks English (if not, she will find someone to translate!).  Also, you can break the ice by either complimenting one of her runs, or just showing a lot of admiration for her dog.  Personally, I introduced myself to one of the Russian competitors (Olga Druzhinina with Risk) because I wanted to know what kind of dog she was running.  I told her I loved watching her dog run, and that her dog is very handsome.  I learned that Risk is a Smooth Fox Terrier/Sheltie cross.

Do you have any helpful advice for anyone else heading to an international competition for the first time?

(2) Mental management is not hocus-pocus.  If you don’t have a process to manage your nerves in a competition, then you need to develop one.  Everyone’s process is unique, but there are some very helpful materials out there that will point you in a good direction.

Training for the future..

Overall, how do you rate the experience of competing in your first international competition?

It was a fantastic experience.  Chiqui was happy, the team was cohesive, Rachel Sanders is a great coach, and I loved having so many opportunities to get in the ring—you got a lot of “bang for your buck” compared to other international competitions.   Chiqui and I competed at a “personal best”, though I plan to set a new “personal best” next year.  Now that I am better informed about what Chiqui and I are up against, I definitely have some different ideas about what to train and how to run courses between now and next year, and how important it is to start fundraising as soon as possible. I’m hoping to be on the team again next year!

What was your favorite, most memorable part of this adventure?

There’s a couple things, actually.  One thing I will always remember is how supportive the local agility community was before my trip.  So many people congratulated me and participated in fundraising events.  One person even sewed me a quilt and presented it to me during the briefing at a local trial.  It was both humbling and edifying to be on the receiving end of that much good will.

Another thing I will always remember is how I felt and reacted when I started watching videos of my few runs.  My primary reaction was: “We can be faster!”  As an instructor, I look at my students and see their potential.  Sometimes I see so much potential that I feel incredibly excited and impatient for them to hurry up and get there!  But it’s harder to see the potential in yourself—at least for me.  But watching my runs at IFCS, I could see OUR potential.  Yes, it was extremely satisfying to see that we were performing at the top of our game.  But my overwhelming feeling was excitement and anticipation: I could see our potential, and I couldn’t wait for us to get there!

Watch some of Joy’s competition videos 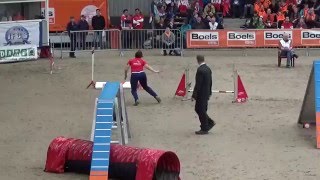 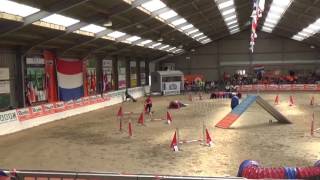 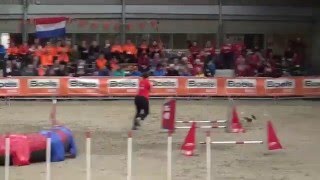 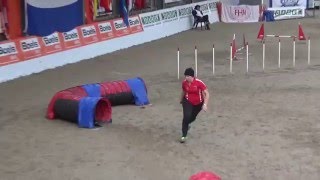 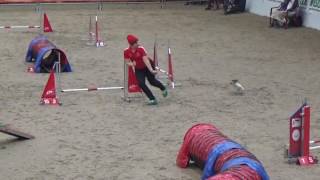 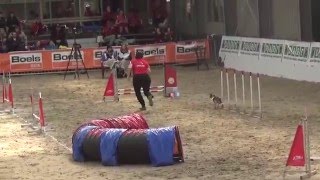 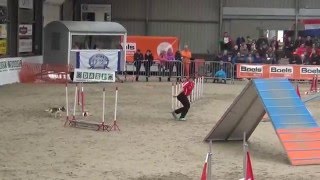 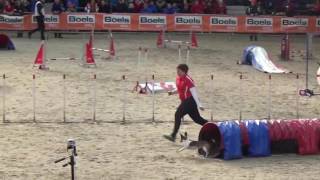 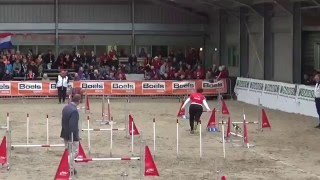 We are so proud of Joy’s accomplishment!
Read Part I and Part II
Joy Mercier discusses her adventure at the 2016 IFCS World Agility Championship.